POWER PROTEST AND RESISTANCE - THE ART OF REVOLUTION 9/26/15 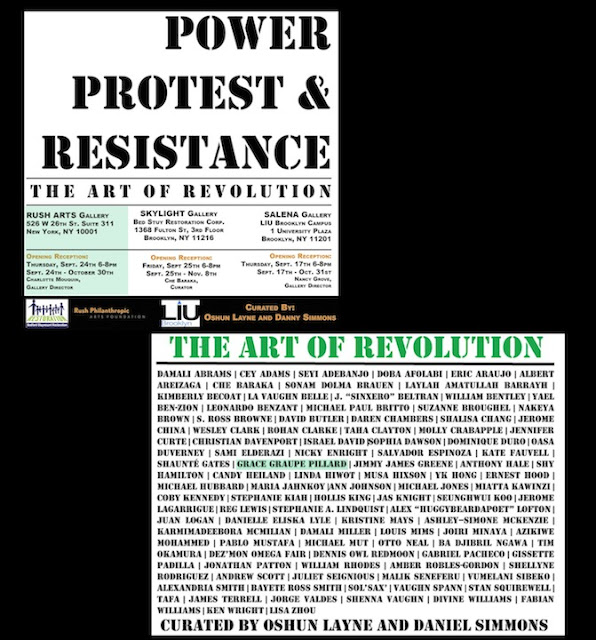 Danny Simmons and Oshun Layne are the curators of this ambitious show, with over 100 participating artists being exhibited in 3 venues - RUSH GALLERY Gallery, Chelsea, NYC; SKYLIGHT Gallery - Bed Stuy Restoration Corp.Brooklyn,  and SALENA Gallery on the LIU Brooklyn Campus. Since I am exhibiting in RUSH ARTS my focus is on that particular space, but I encourage everyone to go to all three. POWER PROTEST AND RESISTANCE comes straight outta the blaring tabloid headlines; many of the works address the anger of those who feel powerless in the fight against institutionalized control which is considered by many to be an entitlement - not to be examined or investigated. But there is a “tipping point” where a tsunami of voices can crash into the structures of government and demand to be heard - no longer guarded and blazing internally with rage in the face of the tactics of intimidation and fear.

Upon entering the gallery, the tone of the exhibition is set with Paul Deo’s black and white painting  of a disembodied head screaming BE HEARD quoting Martin Luther King: “There comes a time when silence is betrayal”; underscored by the artist Tafa’s futuristic abstract painting, PROTEST/MARCH-DOUBLE SYNTHESIS railing against a democracy that “incarcerates millions of its youth” implicating not only the brutality of the system but the silence of the majority. 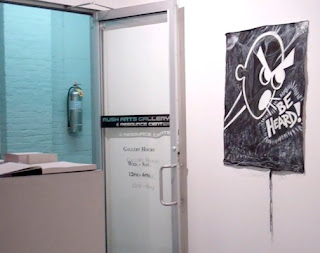 There is an immediacy and intelligence to many of the artworks; some are very direct - such as Kristine Mays’ wire hoodie, as beautifully delicate as lattice but referencing chain-link fencing to guard against the exposed tenderness of the flesh. On the other hand,  Shellyne Rodriguez creates a whimsical looking chandelier in the shape of an eye, made up of mousetraps titled THE PROTOTYPE FOR BELPHEGOR’S EYE.  Belphegor, a recurring character in her work “is the demon of SLOTH who imbues its prey with spiritual or emotional apathy…” Rodriguez is incriminating all those who exploit their brethren for their own predatory greed, trapping them through the temptation of wealth and meaningless displays of ostentation. 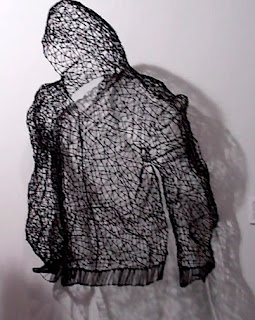 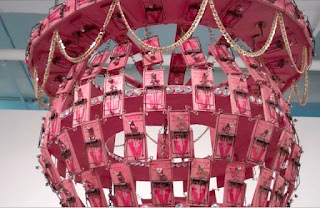 Cey Adams touching 12”x12” silkscreen and enamel on canvas paintings titled “”4 Little Girls” references the1963 murders of  the young African American girls - Addie Mae Collins, Denise McNair, Carole Robertson and Cynthia Wesley - in the basement of the 16th Street Baptist Church in Birmingham Alabama. The faces in the works are almost invisible and as you move around and look closely attempting to grasp their appearances, we perceive ghostly images emanating in and out of the canvas referencing the chimerical function of memory - fleetingly out of sight but permanently etched into the weave of history. 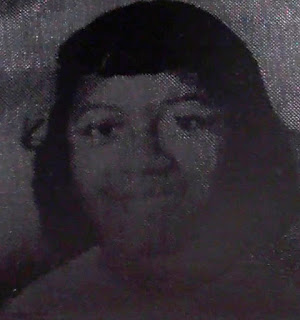 Sol’Sax’s digital photograph THE BLACK POWER MOJO HEAD also invokes a seminal point in the fight for human rights, when Tommie Smith and John Carlos, both shoeless wearing black socks  to echo poverty raised their gloved fists, heads lowered, in the gesture of the black power salute during the playing of The Star Spangled Banner at the 1968 Olympics medal ceremony. In his statement accompanying the photograph, Sol Sax wrote: “I anchor Tommie Smith and Joh Carlos’s historic Olympic protest pose in Congo ancestral magic…Racism, Europeans magic means of supremacy is confronted with The Congo Nkisi Nkondi that means ancestral knowledge or spirit from heaven that hunts in this case the inequities of a racist society. By placing Minkisi Minkondi (the plural of Nkisi Nkondi) in the context of the black power movement I seek to point to the ancestral roots of this magical protest pose…” 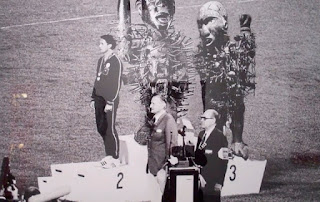 Che Baraka’s work, AN ANONYMOUS PAIRING, astutely shows the roots of cubism in African art by altering Picasso’ SEATED NUDE AND STANDING NUDE revealing that the beginnings of modernism is based on cultural imperialism without attribution to its sources. Baraka wrote “…that the piece also addresses the inherent value of brown bodies and suggests an interplay of different strategies for social re-envisioning as symbolized by the Elegba and Guy Fawkes masks.” 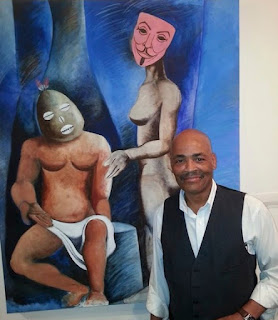 Jerome Lagarrigue painted a triptych- BATTLE FOR AREA X and GAS#2 and BACK OF A PROTESTER’S HEAD - that graphically portrays the universal gestures of violent protest occurring  all over the globe depicting heaving bottles, molotov cocktails, throwing of stones, etc. against rulers who have access to tanks and tear gas to squelch dissent. Other artists address domestic issues - familiar staples of recent news media - that slip in and out of our consciousness - names change, soon to be forgotten, but the iconic images of art contradict this burial of awareness. Taha Clayton’s SATURN paints a portrait of Kalief Browder who at age 16 was wrongly arrested and sent to Riker’s Island Correctional Facility for 3 years for stealing a backpack - 2 of those years spent in solitary confinement. He was eventually released and shortly thereafter killed himself. Clayton shows Browder, eyes shut, flying into the vastness  of the atmosphere, enveloped in peace. He includes a quote from Stevie Wonder’ s lyrics to Saturn. 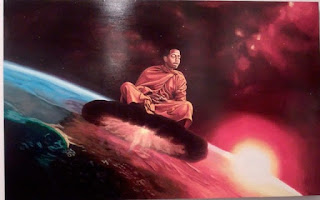 In her mixed media piece, FOR TITO (IN HOMAGE TO SANDRA BLAND,) part of a series exploring issues of police brutality, Sophia Dawson did not forget Sandra Bland whose questionable suicide days after being stopped for a supposed traffic infraction, landed her in jail for questioning the arresting Officer’s authority. Watching the  incident on video reaffirmed the deplorable complacency of authority placed in the hands of people whose beings are often permeated with ignorance  and contempt. And then we have a painting by Jas Knight titled RAY’S GAZE of former officer Ray Tensing who shot an unarmed Cincinnati motorist, Samuel DuBose in the head, after being stopped for not having a front license plate on his automobile. Jas Knight wanted to show the face of hatred and incise it into our cognizance letting the world know that the perpetrators of malevolent actions are going to be remembered. 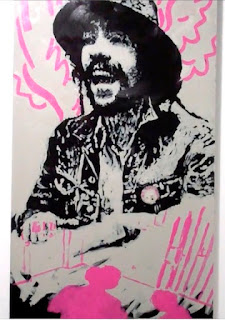 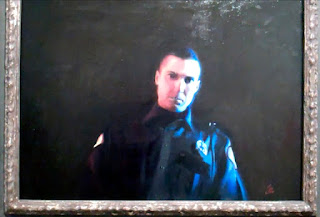 Regrettably I have only written about a few of the pieces that are up in these provocative exhibitions, I urge you to attend all three venues.

Posted by grace graupe-pillard at 1:41 PM