Seventy-nine year old British director Ken Loach has been dealing with social issues in film since the early 1960’s and JIMMY’S HALL is no exception, based on a 10 year period in the life of Jimmy Gralton, a Leitrim (County in Ireland) Socialist -  the only Irishman ever deported from Ireland in 1933. The clash between the Catholic Church, intermixed with local politicians  and what they considered Stalinist/Communist ideas brewing in a small village’s Dance/Meeting Hall - built for the local community of farmers and laborers -  teaching art, poetry, song, boxing classes, highlighting music and dance performances; a space to openly speak about landowner/working conditions.

I am a sucker for a good-looking Irishman, and Barry Ward is just that; he plays Jimmy who is expressive, passionate and a stirring advocate for basic individual freedoms. We meet him in 1932, after a forced 10 year exile in NYC, returning home to work on the family’s small plot of land at a “hopeful” time, a new government has come into power. Set amidst the rolling green hills of an idyllic village, Jimmy plans to settle down and help his elderly mother, a former librarian who years earlier drove around the rural area, bringing books - catalysts for ideas - to her neighbors. Life in 1932 is and is not the same - personal relationships have changed - former love interest Oonagh who fought at his side in earlier days, having not heard from him for a long time after Gralton was forced to flee Ireland in 1921, married a “solid” man from the hamlet and bore 2 children. Despite the years gone by, their deep connection has never come untethered and the tenderness between these two intense fighters for human rights is  filmed in a lovely scene where they slowly move together, swaying under the pale light of unrealized dreams; fulfillment impossible.

JIMMY’S HALL is a movie about the pervasive paranoia and corruption of Ireland’s Government/Church partnership in maintaining “moral order” in a world that is  absorbing new ideologies; where principles and tenets cannot be contained in ancestral and inbred receptacles. The community demonstrates an unrelenting courage and willingness to confront representatives of the power elite in their attempt to love, laugh, frolic, and examine doctrines that have been intrinsic to them - no longer isolated they dare to defy through unity thereby gathering courage. Director Ken Loach’s radiant portrayal of Jimmy Gralton resurrects a fighter whose name was all but forgotten. The combat against a powerful, intransigent armed state in 1932 seemed desperately futile, but history has proven otherwise. 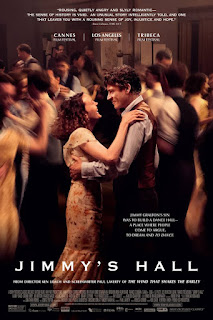 Posted by grace graupe-pillard at 7:25 AM No comments: Links to this post

She makes me happy. From the moment I walked into the 6th floor galleries at The Museum of Modern Art, a big grin appeared on my face. I was feeling a bit under the weather and the cure was Yoko Ono. A delicate electric charge infuses the poetic underpinnings of her work from the beautifully penned instructional notes challenging viewers to “do” things so they themselves become ”artists” - freshly aware of the world around them - the touch of others, their whispers; their relationship to the wind, experiencing the shining sun which eventually "melts into the sky" - before  you are ordered to make a tunafish sandwich.

Her prescriptions are remedies aiding in the attentiveness of one’s own breath, allowing you to feel the heart beating and listening to the rhythm of its murmurs. In Yoko Ono’s universe we live conjoined with nature - celebrating an individual's humanity, but always as inclusive beings brought together to live in peace on this planet.

The exhibition includes films  which documented audience interaction with the artist - particularly  the 1965 “Cut Piece”, her best-known performance work staged at Carnegie Hall. Yoko Ono was visually communicating the passive and acquiescent role of women. Visitors were prompted to come up on the platform - where the artist was sitting motionless - and cut away her clothes snip-by-snip, as she remained stationary,  frozen, but not expressionless. I found this improvisation harrowing. Women often came up and with more discretion wielded the scissors with an attentive delicacy; on the other hand a few men pushed past psychological boundaries, attempting to inflict humiliation and in so doing proclaim mastery over her body. Ono’s face is seen communicating equanimity, confusion and disdain - her response being both revelatory and dramatic.

The intention of Film No. 4 1966-67 “ was to cover the screen with one object… something that was moving constantly…” Buttocks filled the screen, becoming the star of this approximately 80 minute 16 mm film which included 200 participants walking naked “in place while remaining centered in the camera shot.” Sometimes the genders were not immediately apparent as we focused on the myriad  sizes and shapes of derrieres, the amount of body hair, and the way the gluteal muscles sidle up against one another in the process of rapid exercise.

The Fly filmed in 1970 is a 23:55 minute view of a fly’s  slow exploration across a naked woman’s body. She is impassively lying on a bed, legs outstretched, while it explores every bit of her torso - a caressing lover fabricated out of hallucinatory dreams. There are close ups of the fly - one showing the wings flapping, taking a nip out of the model’s stomach, stretching the skin, while buzzing about on its erotic and infiltrating journey. The soundtrack features Yoko Ono singing -  her insect like voice screeching along with John Lennon’s instrumentals adding another layer of vulnerability to the exposed form.

Flies are a medium that Ono had used in 1971 when she released them in MOMA’s Sculpture Garden; the flies soaring off into the galleries and then “radiating throughout the city…” Forty-four years later her exhibition is publicized through news and digital media - no longer having to hire a man with a sandwich board traipsing back and forth on 53rd Street promoting an imagined event.

Upon exiting the exhibition, I smiled again, delighted to have glanced over at the wall, catching a glimpse of  Yoko Ono's never-ending dictums - this time expressly drafted provisions to  the exhibition’s co-curators - Klaus Bisenbach and Christophe Cherix:

Time Piece to Klaus
Make a film of a day
To be viewed in 50 years time. 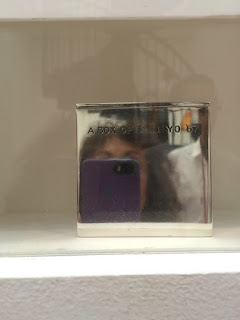 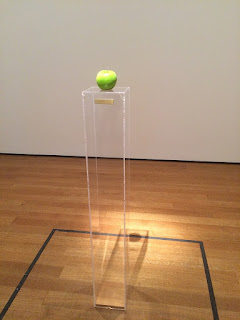 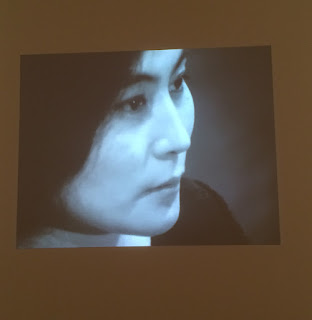 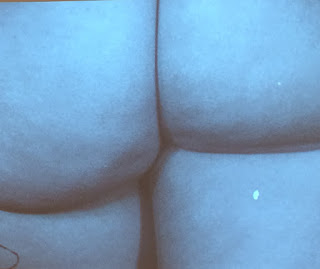 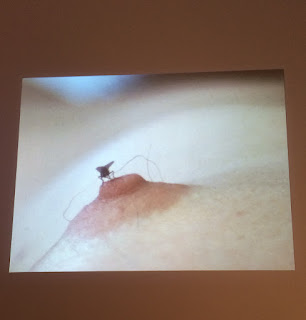 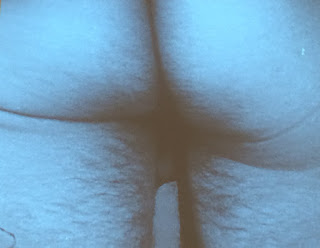 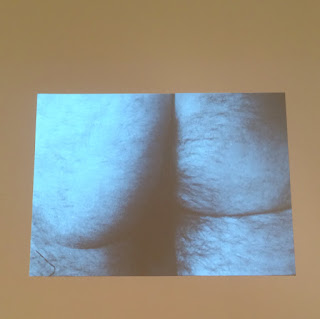 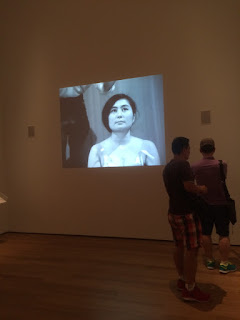 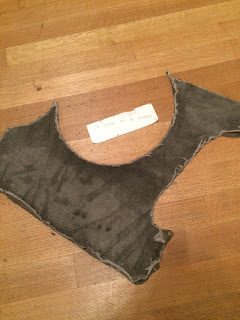 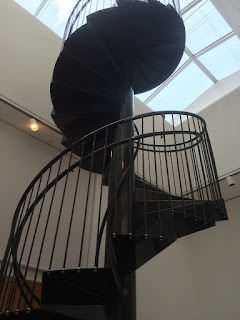 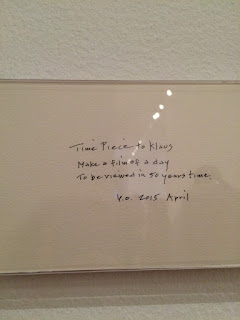 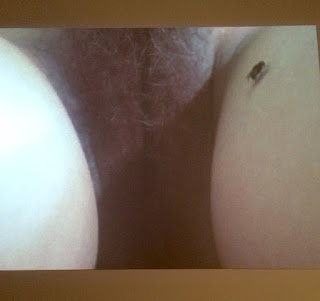 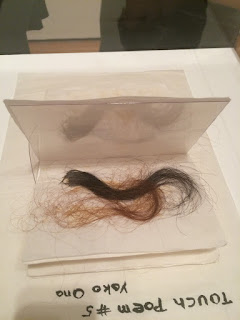 Posted by grace graupe-pillard at 8:37 PM No comments: Links to this post

Written and directed by Maya Forbes, INFINITELY POLAR BEAR is based on autobiographical reminiscences of family life in late 1970’s Boston, where she and her sister were being raised by a manic-depressive father, while their mother studied for an MBA degree in NYC at Columbia University with the intent of returning in 18 months, equipped with credentials and the hope of myriad job opportunities in order to support the household. The title gives us a clue to the film’s focus - the two young girls - whose resilience and humor give them the spunk and fortitude to cope with their father’s mental illness with all the pain, humiliation and affectionately tender gifts he imparts in the process of eccentric parenting.

The impact of psychotic behavior can be devastating not only to the person  who is suffering, but to those associated with him/her; the tentacles of delusion are piercing, powerfully far-reaching and intensely exhausting. Mark Ruffalo as Cameron (Cam) Stuart - the father - gives a substantive performance of a man who is in a hyper state of irrationality - speaking fast, loud, and so self-centered that he is unaware of the impact of his bizarre behavior on those around him. Since this film is based on a “true” story, I accepted the notion that his wife Maggie, played by Zoe Saldana - a beautiful presence - after consulting Cameron’s psychiatrist - allows her daughters to be in the care of someone who is so on the edge of falling off the thin, taut line of sanity.

The children, Amelia ( a feisty  performance by Director Forbes’ daughter Imogene Wolodarsky) and Faith ( Ashley Aufderheide - I loved every scene she was in) become their father’s keeper/caretaker and  lifeline to the world; children who have the ability  and sensitivity to decipher social cues, exhibiting a maturity and awareness of reality that their Dad rebuffs and repudiates.  We never forget that these are just kids - often frightened, but brave and  authentic; chiding, scolding  and yelling in their attempt at guarding the guardian.

There are tender and humorous moments; passionate and inventive interactions; the relationship between a vulnerably fragile man who can be inspiring, playful and crazily innovative stimulating his offspring with a zany humor and iconoclastic outlook on negotiating the boundaries of life’s barricades. As a stay-at-home father (at a time when that expression did not even exist) questions concerning the male ego and role reversal - the tedious and difficult job of up-keeping a home and allusions to burgeoning Feminism - female desire to freely participate in the workplace - are explored. On the other hand, Identity issues are not scrutinized with the same profundity. The siblings are a product of a bi-racial couple; when the older child who looks “white” questions whether she should be considered “black” because her mother is African American, the answer is a resounding YES and resolved with alacrity without delving into the complexity of the subject.

INFINITELY POLAR BEAR is an affective and heartrending experience about coping and living with  bi-polar disorder; interspersed with lighthearted moments of intimacy, creative focus. and kindness. I lost a family member to mental illness so this movie was particularly penetrating; witnessing the struggle with demons battling for command over logic and reason will never be expunged from my heart; this film grazed that deeply entrenched grief. 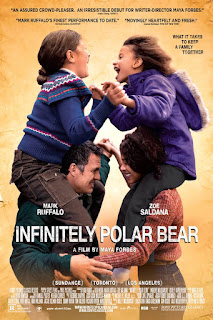 Posted by grace graupe-pillard at 11:38 AM No comments: Links to this post