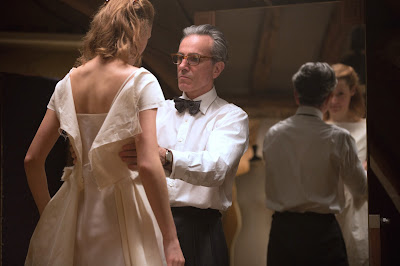 Paul Thomas Anderson, the Director of Boogie Nights, Punch Drunk Love, There Will Be Blood and Magnolia tells complicated tales with an elegance wrapped in humor, channeling the dark, mysterious beauty of unmasking layers of our all-too-human enigmatic psyches into the glaring light of prosaic reality. His latest film, PHANTOM THREAD is full of twists and turns  - from the main character being a master controller to being controlled; from the ghostly, tensile thread of holding oneself together to unraveling feverishly with the curative relief of being unbound.

We first meet Daniel Day Lewis  (excellent) who portrays an extraordinarily  handsome man, keenly aware of his fading youth, powdering his face, running graceful hands through his graying hair and gently polishing his shoes; this is Reynolds Woodcock  - Couturier to the elite of London in the 1950’s; an extremely sensitive neurasthenic designer of dresses whose House of Woodcock is run with military discipline by his beloved sister Cyril (a quiet, unnerving performance by Lesley Manville) and a devoted group of experienced older women who fabricate his artistic ideas, catering to his every need - each individual contributing to an exquisite productive outcome.

We also meet Woodcock in a more casual  personal setting, eating breakfast with his sister and a soon-to-be-discarded lover - as is Reynolds’ wont. His delicate nerves cannot tolerate any disruption to the routinization of a life that has been constructed to enable him to concentrate on his work day and night. At this point we become aware of Reynolds’ deeply emotional ties to his now deceased mother - a woman whose influence and love are critical to the person he has become, as evidenced by secretly sewn messages tucked, into the fabric, never to be unearthed. This form of communication is a life-line to the past and to the future, for Woodcock fervently believes that his mother is eternally watching him - either a curse or a blessing. 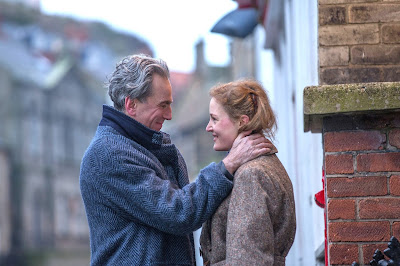 Going to his country home to get away from the bustle of London business, Reynolds has breakfast at a country Inn and lays intense eyes and the avidity of his persona on a waitress by the name of Alma (a sturdy peasant-like figure of a woman played by Vicky Krieps) who is bemused by the rapacious breakfast order of a man whose hunger and appetites are laid bare, and is quickly seduced into being a model and “muse” into The House of Woodcock. The relationship between Mentor and Muse is explored by the visual treat of watching Alma in varying costumes and partaking in the world of Fashion - a world where the rules and schedules are tight, where the constriction of freedom is heightened  by a close up shot of the tightening of a corset - the air slowly becoming more and more restrictive. 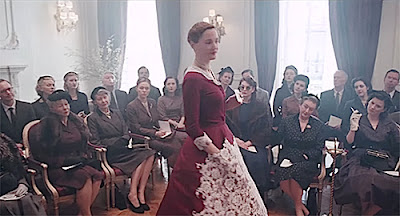 Paul Thomas Anderson is exploring the sphere of “genius” with all its attendant myths, poking with a Guignol satiric thrust at the absurdity of the oppressive commercial world that artists can paint themselves into. For some viewers,  Alma will seem demonic, but for others she is a release valve to the pressure of cupidity and ego-centrism - perhaps a liberating savior or the mother reborn.Those are the questions this film raises aided by the lingering music of Jonny Greenwood and the director’s sensuous cinematography. Fabric and its  accompanying filaments of beautiful fibers  intertwine to create a metaphor for the urgency of love and the need to be identified and recognized for the unique entities that we all are.
Posted by grace graupe-pillard at 1:03 PM No comments: Links to this post 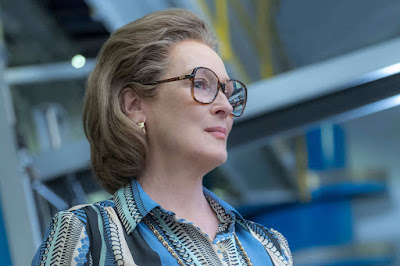 Spielberg often directs provocative films, but recently he has relied on obvious tropes to depict his characters and plots; they are often so cliched that I could not help but wince in the theater and was told to shush by another patron. Drama is"heightened" by placing familiar barriers in the path of the fulfillment of a time-sensitive mission. Ie: a car almost hitting a copy boy running to deliver important papers. Sigh.....

On the other hand, it is worth seeing THE POST (referring to The Washington Post newspaper) and its 1971 role in the publication of The Pentagon Papers which exposed the hypocrisy of United States Presidents going back to Truman, on the reality of the so-called "successes" of American soldiers fighting in Indo-China, the area later known as Vietnam, Cambodia and Laos.

The source of these potent revelations was Daniel Ellsberg who today, at 86 is making the talk-show rounds reliving for a new audience his historical whistleblower experience; the extraction of top secret papers from the Rand Corporation and secretly giving them to The NY Times and The Washington Post for publication.
https://www.nytimes.com/2017/12/20/us/pentagon-papers-post.html?_r=0 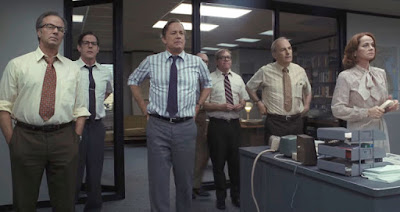 Tom Hanks appears especially fit - what happened to his doughy face of yore? Here he looks svelte and passionately portrays Ben Bradlee- a bit of a strutting peacock - the Post's Executive Editor, who believes it is critical to get this story out to the public. Freedom of the press and the unraveling of lies and propaganda in the search for truth is this journalist’s credo. 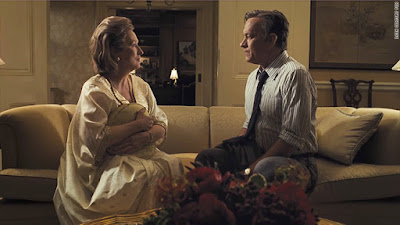 Meryl Streep as Katharine Graham is both overly awkward (Spielberg making a point and overdoing it) and a fierce defender of the paper her family has run for years - a newspaper that often comes in second when being compared to the NY Times, and one that is in financial difficulties. Being a woman running a paper, surrounded by men who do not take you seriously, is challenging and we see the evolution of Graham’s confidence and resolve in doing what she intensely feels is right - and the respect eventually accorded her by the men who only saw her as a presence to be tolerated.

THE POST resonates at this time because of Trump’s “FAKE NEWS” crusade to silence the voices of criticism and the many women who are screaming to be taken seriously in the workplace - not only in 1971 but just as fervidly today.
Posted by grace graupe-pillard at 3:05 PM No comments: Links to this post