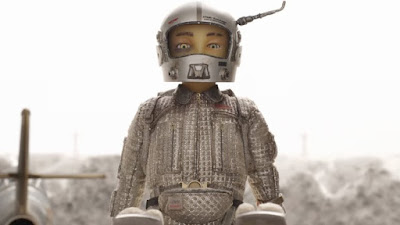 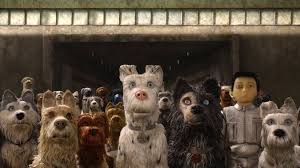 Anyone who knows me well is aware of my complicated feelings toward dogs. Due to irrational fear, I like to observe them from a distance…I like them better when I am comfortable in their presence and they do not bark or jump on me…I like them best when they are sweet and quiet and most of all when there is a movie screen between us. In Wes Anderson’s new animated film, situated in a futuristic Japan, titled ISLE OF DOGS there are images that delighted me; patterns of color and shapes that filled the darkened theater with a playful ambiance. The dialogue is witty - humor is both visual and aural which is why I revere the eccentric director, Wes Anderson who treats his dramatic personae (be they animals or humans) with a caress of gentleness endowing them with compassion, rebellion, ferocity and affection, laced with a dollop of irony. Wisdom is never absent in his films - kooky, crazy wild truths. 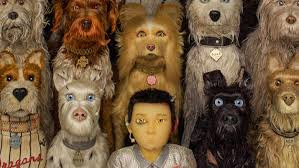 Dog vs cat enthusiasts are pitted against each other with the leading political authorities being cat proponents. Canine cleansing is the final solution to a contagion of dog “snout” disease that has become rampant in Megasaki City and all-powerful Mayor Kobayashi has decreed the forcible exile of hundreds of thousands of dogs to a remote place - Trash Island - a place filled with garbage and scurrying rats. There is some political opposition to the corruption of the ruling autocracy but it is barely a whimper.

We meet the hero - the intrepid Atari, who due to the death of his parents becomes the 12-year-old “ward” of the Mayor (a politically cynical, ennobling move) and is given a dog, SPOT to protect the young lad and be his companion. Sadly Spot is the first dog to be carted off to Trash Island and Atari is hell-bent on finding his loving friend. He hi-jacks a plane which sputters and crashes into the wasteland of filth and muck - the detritus of human civilization - where painfully skinny dogs roam about and survival of the fittest is literally the only means of existence.

ISLE OF DOGS is the magically heroic tale of the search for a lost and adored partner.  During the pursuit, Atari who often rails in Japanese (no subtitles -  but we get the idea ) teams up with the Alpha dogs on the Island - each having his/her own back-story; one being an ex-show dog; a house pet; another successful in advertising doggie food, and most importantly the powerful stray, Chief (voiced by Bryan Cranston) who has never trusted the fickleness of people-masters, bitterly independent as well as being the most ferocious fighter of the bunch. Imagine dogs with the peculiarity of biped’s personalities, infused with charming dialogue filled with teasing jabs and dulcet flirtations. ISLE OF DOGS  creates an enchanting adventure, which is both stunning and daunting.Through surrogates, we see the nature of power and the absolute degradation of the spirit when faced with starvation, weakness, and disorder.

There are many subplots in the movie that occur in Megasaki City - but none held my interest in the way the events on Trash Island did. Communities (packs of dogs) are created in the direst of circumstances - alliances are forged and trust is built with courage as a  prime motivator for survival - a morality fable for our time.
Posted by grace graupe-pillard at 1:21 PM No comments: Links to this post