I am fortunate to have had the opportunity to visit with Johanne Bryant-Reid and talk about her art collection and working with the Romare Bearden Foundation for Women's Voices For Change.
Here is a link to the article:

More images in the order that they are mentioned in the article. 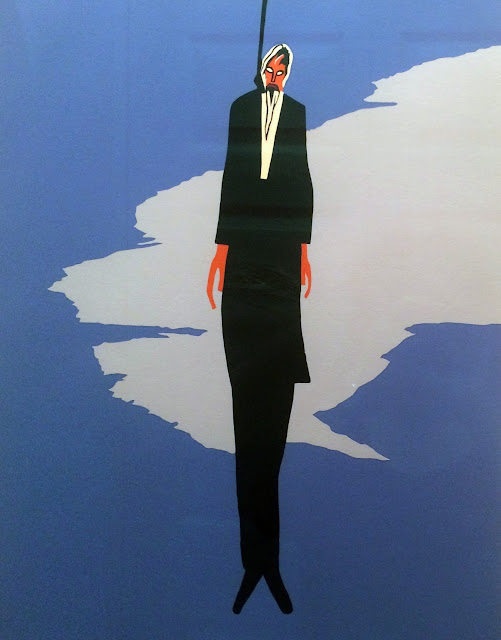 
Posted by grace graupe-pillard at 8:10 PM 2 comments: Links to this post 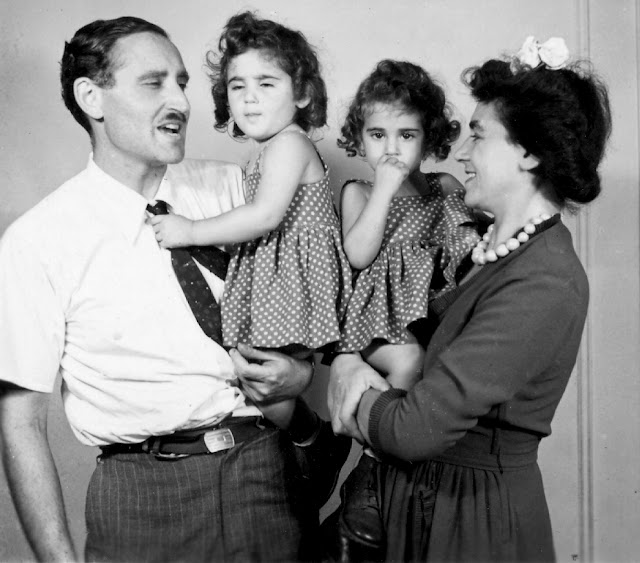 I am thankful to have had parents who were given the opportunity to escape Nazi Germany's maniacal tyrant and came to NYC to walk and breathe in the air of freedom. My father who studied to be an architect began his life in his adopted country by picking up cast-away-try-on hats from the floor of the S.Klein Department Store on Union Square and 14th St, a long "pick" in hand. He then did draughting work until he got his architectural license In 1948, and spent his life building NYC's Middle Income Housing projects - the client being the ILGWU.

My mother had sewing skills, taking jobs tailoring for different stores and was for many years the major contributor to the family income. We also lived with my maternal grandparents - my Omi and Opa. I adored Omi whose bed I would rush to on Sunday mornings hopping under the fluffy down cover to receive the warmth and comfort my anxious parents were incapable of giving me.

My Omi had other grandchildren, (her son's daughters) in Holland where once a year she would visit (usually on the SS Rotterdam) - and to this day the sight of an ocean liner will bring tears to my eye accompanying a panicky flutter to my heart.

If my parents were alive today, the very fact that Donald Trump could win the Presidency of the country that saved their lives and a nation which they venerated, would have caused them deeply felt grief, fear, and the dread of deja vu.

Posted by grace graupe-pillard at 5:26 AM No comments: Links to this post 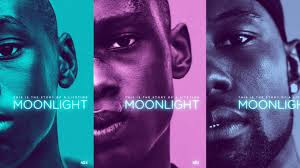 MOONLIGHT, directed by Barry Jenkins is an exquisitely written and delicately acted tale of how a young African-American boy navigates through the covertness of childhood isolation, into the reticence of adulthood. Three actors portray Chiron at different stages of existence - all maintain the silent presence of a person with a deep secret viewing a world of abuse and neglect with the curiosity of innocence. The young Chiron/aka “Little” (wonderfully acted by Alex R. Hibbert) realizes at an early age, that he should keep the pain and turbulence that is cloaked behind his dark-intelligent eyes hidden - it is best to stay silent and remain an enigma to others. Desire is  tucked away from the periscope of one's peers, under a translucent sheet of manhood, thereby avoiding some of the emotional lacerations that kids inflict on one another, particularly if you are “different” and happen to be gay and poor, living in Miami with a drug addicted single mother. 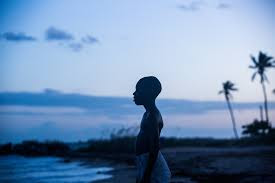 Life changes when “Little”, chased by a group of stone-throwing boys, finds refuge in an empty shack , breathless, curling up on the floor, bony arms flung around his thin body for protection. Juan (the wonderful performer Mahershala Ali), who happens to be the local drug dealer, enters the room and sees this young boy silhouetted against the wall, a small warrior standing erect refusing to utter a word, and an unspoken bond is forged - a connection based on Juan’s memories of his own childhood. “Little”,  unwilling to talk, but willing to accompany this tall, powerfully built potential “father figure” to Juan’s house for a home-cooked meal by Teresa ( Janelle Monae), the woman he lives with. Teresa instinctually recognizes a “wounded” child, and provides “Little” with a patina of kindness and warmth momentarily  allaying the scars incurred by years of bullying and abuse. 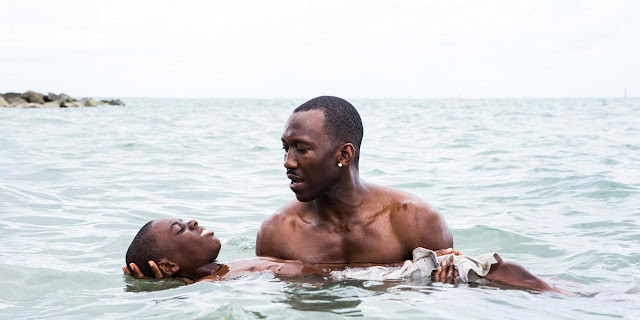 MOONLIGHT gives us some lovely moments between Juan and his pre-teen protege - particularly one involved with learning to swim and the oft-used metaphor of the power of water to cleanse; but this scene is so beautifully filmed that it erases any notion of banality. 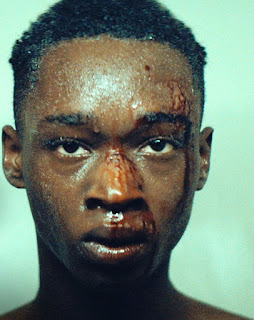 In the next chapter, we meet  the adolescent Chiron (Ashton Sanders) and witness the anguish of being a loner. Bullies take advantage of those they sense can be  tormented and the High School years can be agonizing to a sensitive, fragile young man moving into adulthood. Innocence is slowly eroded; the protective veneer of armor and detachment are easily pierced, yet a sense of wonder remains. Chiron experiences moments of joy particularly in the company of a childhood friend, Kevin (Jaden Piner,) who is practiced in the art of subterfuge and easily glides through his fellow teenagers’ posturing mentality - appearing to be part of a group, but in reality attracted to Chiron’s desolate stillness. Their relationship is restrained, but undercurrents of sexual  yearning - the physicality of touch - a tender finger grazing a hand - can transform years of misery and sorrow into the confusion of love. 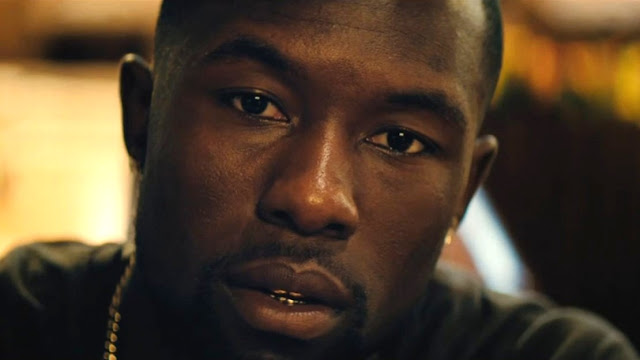 The last chapter occurs 10 years later when a powerfully built Chiron  (alluringly portrayed by Trevante Rhodes,) returns home to Miami - his wordlessness remains, but the  years have altered his appearance, and for a moment we believe we are seeing Juan again - the man who helped shepherd  “Little” through the turmoil of childhood. Chiron having maneuvered through sphere’s of hate and humiliation, is eventually able to reconcile with those who have previously cracked his world;  a mother who could not see beyond her own aching needs, and his former confidant Kevin ( Andre Holland,  depicting the sensuous, and elegant, adult Kevin.)  A guileless candor belies Chiron’s rugged presence; the passage of time is complex, paving over the self-inflicted wounds of longing, but also re-igniting the desire to embrace the future. 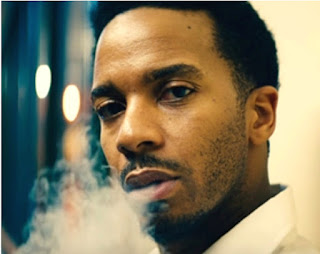 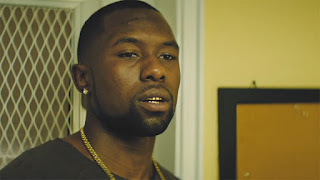 Phong Bui with panelists Joyce Pensato, Louise Fishman and Mark Rosenthal. Whenever I go to panel discussions, I writhe in my seat and mutter under my breath, and always regret not asking questions and challenging some of what is said. I did enjoy hearing Louise Fishman and Joyce Pensato talk directly about their personal encounters with Joan Mitchell; how she was both admired and a mentor of sorts to the then young artists, and how JM's "tough/boy's club/drink them under the table" attitude could be inopportune and oppressive. I particularly appreciated that Louise Fishman did not feel the need to mythologize the artist, and individualized the discussion by interlacing personal history with its effect on her own subsequent artwork.

Phong Bui asked questions of the panel, wondering how they felt about this remark supposedly made by Mitchell: "Painting is like riding a bicycle with no hands", The panelists' responses were varied, but there was agreement that this statement exemplified Mitchell's utter confidence in her process and work. I on the other hand - a painter for many years - felt that utterance referred to the fact that artists are always taking risks...sometimes driving blind, zig-zagging off the path, control unleashed - and then if lucky the exhilarating freedom of discovery occurs.

I have some thoughts about Joan Mitchell's work, and when Phong Bui wondered whether nature influenced her? I wanted to shout out OF COURSE it did - she lived in the midst of verdant gardens in France; her surroundings were infused in her being and became the SOURCE material for her work. I also felt that Mitchell must have studied DETAILS of Monet's late works - the close-ups where we can see Monet's hand making marks gliding the paint with his brush, from the linear to more opaque massive forms - the weaving and overlay of color - both muscular and delicate - the dance of Drawing and Painting are equally important - they cannot be divided as they are inseparable.

Click on link for more information on exhibition:
http://www.cheimread.com/exhibitions/current
Posted by grace graupe-pillard at 10:18 AM No comments: Links to this post