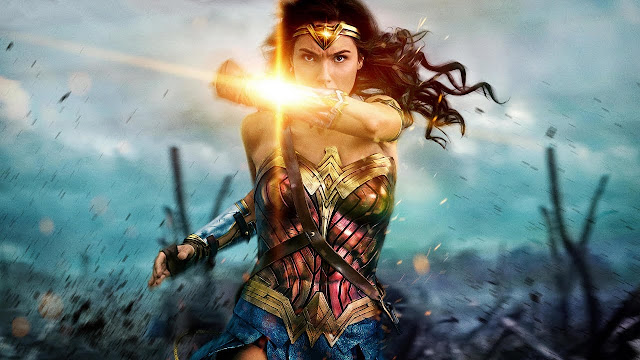 25 years ago I created a ‘Wonder Women Wall” for The Port Authority Bus Terminal in NYC made up of an installation of pastels/cutouts on canvas drawings of powerful women - women whose courage and toughness is discernible in the pursuit of their dreams; women who negotiate the daily struggles of life’s conflagrations; women who are mothers, sisters and daughters who endure the everyday grind of work, and fight for what they believe in with tenderness and tenacity. They are all flesh and blood, vulnerable Wonder Women who prevail; not immortal, but dealing with their mortality without the aid of super-human powers, lacking a sword and shield, steel wristband bracelets, and breastplates. They are the breathing, conscious descendants of the mythic phenomenal Wonder Woman - the D.C. comics Amazon warrior who has the physical prowess of the greatest male warriors - a woman who captured my imagination as a young girl when I was fighting to be seen and treated as the equal of the boys around me.

From the DC Comic Database - some history on the origins of Diana Prince/Wonder Woman:

Diana is the daughter of Queen Hippolyta, the first child born on Paradise Island in the three thousand year history that the immortal Amazons lived there. The Amazons had been created around 1200 B.C. when the Greek goddesses drew forth the souls of all women who had been murdered by men and placed them on the island. One soul was held back from creation, the one that would be born as Diana. That soul originally belonged to the unborn daughter of the first woman murdered by a man (whom Hippolyta was the reincarnation of). In the late 20th Century, Hippolyta was instructed to mold some clay from the shores of Paradise Island into the form of a baby girl. Six members of the Greek Pantheon then bonded the soul to the clay, giving it life. Each of the six also granted Diana a gift: Demeter, great strength; Athena, wisdom and courage; Artemis, a hunter's heart and a communion with animals; Aphrodite, beauty and a loving heart; Hestia, sisterhood with fire; Hermes, speed and the power of flight. Diana grew up surrounded by a legion of sisters and mothers. When she was a young woman, the gods decreed that the Amazons must send an emissary into Man's World…Before embarking on her mission, Diana was given the Lasso of Truth, forged by Hephaestus himself. She was also given the Sandals of Hermes, which allowed her to instantly traverse great distances in seconds. Diana's mission was one of peace, but part of it initially involved defeating a mad plot by Ares to destroy the world.
http://dc.wikia.com/wiki/Wonder_Woman_(Diana_Prince)

Patty Jenkins the director of WONDER WOMAN charmingly recreates the idyllic Paradise Island - a peaceful enclave, where for many years the Amazons have been preparing and honing their battle skills for the return of Ares, the God of War -  and the inevitable final clash between Good and Evil. We first view Diana - the future Wonder Woman - as a young mischievously headstrong child practicing in pantomime, echoing the slashing movements of swordplay, already fully confident of her own destiny.

Once Diana has grown into the beautiful, shapely Wonder Woman (played by Gal Gadot, a former model whose acting skills regrettably do not provide the  “gravitas”  or range of emotions that would have elevated her role from being a 2-D cartoon character,) the commercial Hollywood blockbuster entertainment industry takes over the movie. They do so (faithful to the original creation of Wonder Woman conceived in 1941) by placing Diana in the midst of The Great War (W.W. I) complete with flaming infernos, British spies and German villains experimenting with chemical substances to be unleashed upon the civilian populations. And just to brighten the mood, lame sex jokes playing on Diana’s naiveté are regularly interspersed throughout the dialogue, revealing an innocence derived from being sheltered on a remote Island safeguarded from life’s realities. 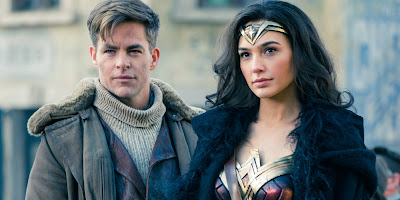 Meeting her first man, Steve Trevor, an American pilot (a baby-faced blue-eyed Chris Pine played cute) - tumbling out of the sky with his plane diving through the barrier mist that enshrouds this secret enclave from interlopers  (a Freudian interpretation might be relevant,) he crashes into the surrounding waters, and is saved by Diana from drowning. This archetype of a “strange species” called “man,” both fascinates and confuses our heroine; nonetheless, she is quickly captivated by this handsome soldier and accompanies him outside of her insulated universe in order to fulfill her destiny and bring “good” back into the Ares-corrupted world.  Having bitten from the apple in the Garden of Eden, she becomes acutely aware of the destructive malevolence of a landscape outside her own.

The final scene in the movie is a spectacular light show of hell erupting with super-woman vaulting from one combat zone to another silhouetted against the glaring heat of combustion, as she saves humankind from the evils of darkness. We women can relate to that and applaud along with the audience in support of Wonder Woman’s fight - though the special effects which attend the cataclysm resemble an amalgam of horror creatures and a wet, melting super monster. Diana’s last words made me audibly groan and giggle: “Only love can save the world.” What??? WONDER WOMAN’s  final message trivialized a film which had a lot of potential. Please, Diana Prince, return to your Paradise and live among those other terrific Amazonian women - perhaps then you will regain my respect in your fight against injustice and not glorify the catastrophic means that is the traditional super-hero solution. 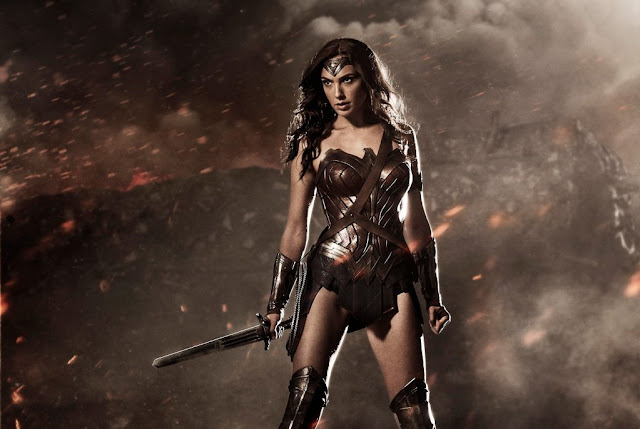 Posted by grace graupe-pillard at 1:57 PM No comments: Links to this post