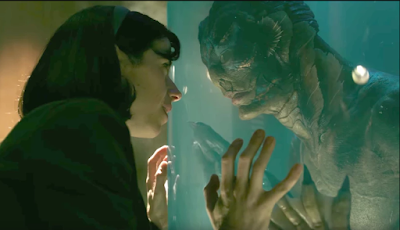 I did not want to see Guillermo Del Toro's THE SHAPE OF WATER, but when I finally saw the movie I was utterly charmed. I was charmed by the fable, by the clippity/cloppity sounds of tap-dancing and seduced by the infusion of nostalgia - the Black and White TV blaring the song and dance music that I spent hours watching and loving as a child....an overtone of lighthearted romanticism that covered a 1950’s/1960’s dark view that was racist and homophobic. 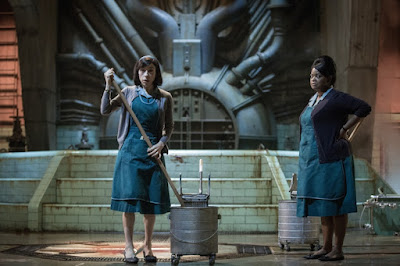 At the same time I cringed at the depiction of a black man as stereotypically “shiftless” - a man who, when he does “act” is the catalyst for evil. I cringed at the desperate feeling of isolation of a gentle, gay man longing for the restoration of his youth. Films are complicated - are they advocating FOR - OR showing an era filled with hatred and bias? Questions I often ask myself as the movie industry is a powerful medium of promotion and indoctrination.  Del Toro makes one forget that some of his personas are based on prejudices that are the maggots eating away at our society. SHAPE OF WATER with its overlap of mysterious fantasy, its veil of beauty - is a powerful distraction from the undercurrents of societal bigotry that is depicted, and we are gulled by the fairy tale’s message of “love” and resurrection.

SHAPE OF WATER is infused with tiresome depictions polished off by some lovely performances and wrapped up in a cocoon of a love story between two different species - an aquatic he-man and a mute woman who connect and communicate their desire without words - just vocal utterings and limited hand "signing". Del Toro effectively manages to make each character fit a cliche by sliding and slippery means- and yet we are haunted by them- the music, the raindrops the fantasy all contribute to this illusion. 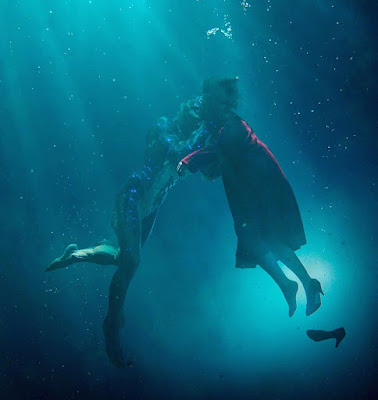 Posted by grace graupe-pillard at 8:24 AM No comments: Links to this post 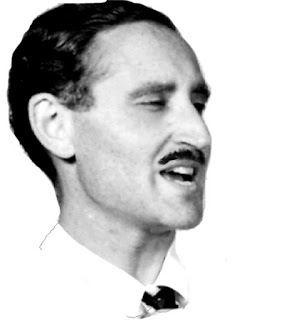 I am looking forward to watching the television series, BABYLON BERLIN depicting a period of change in Germany's Weimar Republic in the 1920's. My father lived in Berlin growing up in that era, the formative years - a time when he grew up from a young boy into a young man. I wish he were alive today so I could ask the questions I never asked about HIS life, instead of only probing mine, indicative of the vanity and arrogance of youth.

An interest in history and political science was honed at City College of NY - where I stopped making art and became immersed in exploring the pragmatic realities of nations that were unknown entities. I took courses with the great Hans Kohn in Nationalism, studied Southeast Asia, and eventually went for a year to Graduate School to study Russian Area Studies.

My fascination with the past was enriched by signing up for classes in Greek Literature, reading not only Homer's epic poems - Iliad and the Odyssey, but Thucydides' History of the Peloponnesian Wars and discussing Herodotus' Histories, which gave me insights into strategies of war, justice, and the concept of "hubris" and "nemesis". In order to understand the poetry of human motivation and tragic "flaws" I then turned to Shakespeare's plays, and the masters of Ancient Greek literature - Sophocles, Euripides, and Aeschylus. - myths infused with wisdom and humor, written with the beauty of the gods they invoked.

Regrettably, I have forgotten so much of what I avidly engorged in my college years, but I have never forgotten the importance of looking at lives that are not only like my own; lives that are lived with the same urgency and desire as all human beings. I attempt to instill in my artwork the shadows the veil of the little that has penetrated my person - a way of conveying the glass-shattering, explosive nature of gliding and fighting our way through the fleeting moments we have on this earth.
Posted by grace graupe-pillard at 7:55 AM 1 comment: Links to this post

A WINDOW ON MCCARTHYISM AND TRUMPISM 2/4/18

When I was a little, mischievous girl, we lived on a block in Washington Heights that had one tree struggling to survive planted in front of our apartment’s first-floor gated windows, where I would yell out to my friends when they were playing late into the night, while my sister and I had to go to bed much, much earlier, enviously listening to the sounds of whooping and hollering coming from the neighborhood kids. That window was an opening to the world outside and just as critically an escape from the oft “anxious” lives of the inhabitants inside.

My parents, refugees from the totalitarianism and genocide in Nazi Germany were more apprehensive than usual because of a man who was gaining power and influence in the U.S. Senate. The time was the mid-1950’s during the McCarthy Hearings (named after Senator Joseph McCarthy from Wisconsin) whose tactics during this “Cold War” era against Communist spies and so-called allies infiltrating into the USA  have come to represent  a period of tension and “…demagogic, reckless and unsubstantiated accusations, as well as public attacks on the character or patriotism of political opponents.” (Wikipedia.)

One day - being a naughty child, I decided to shout out the window that I was a “ Red Commie“ - not understanding what those words even meant but the image was beguiling. I will never forget the rush of being pulled away from my “escape” outlet and scolded with an intensity that I had never seen in my quiet, gentle father. This was serious and my first introduction to the gravity of politics and how it affects all our lives - instilling fear and resistance.