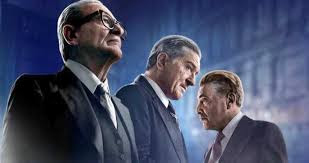 Martin Scorcese's THE IRISHMAN is not one of his greatest films, but it is his longest one. It begins with the camera weaving in and out of rooms in a nursing home - a lovely ballet gliding from one space to another which announces that here is a movie about the movement of time --smooth and beautiful.

And then I experienced the "DE - AGING" technology that the Director has been touting, and I was so distracted by too large heads bobbing on shoulders with no necks on bodies that did not gel with the smoother faces - bodies that no longer had the fluidity of youth; legs that no longer were able to dash upstairs. It actually ruined the movie for me - my eyes could not reconcile what I was seeing and still remain in the movie's moment. 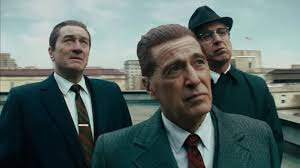 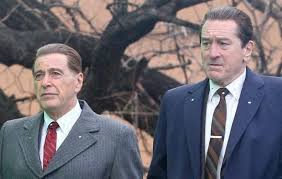 Kudos to Joe Pesci's powerfully quiet performance as Russell Bufalino - a Pennsylvania crime family "capo" who is terrific - a highlight of THE IRISHMAN. Robert De Niro as mob/union enforcer Frank Sheeran feels mundane - giving a mannered performance - the all too familiar grimaces as we witness a man who is "loyal" till he is not; a man who follows orders and is straddling the two worlds of the Mafia and the corrupt Teamster's Union President - Jimmy Hoffa played by Al Pacino - too loud loud loud. We follow Sheeran's relationship and friendship to these two powerful bosses against the backdrop of the history of the 1960s and '70s including the influence of organized crime on the manipulation of political elections. The TV is often running in the background replaying for us the 1960 Presidential election between Nixon and John Kennedy, The Cuban Missile Crisis, the Kennedy assassination in Dallas, etc. 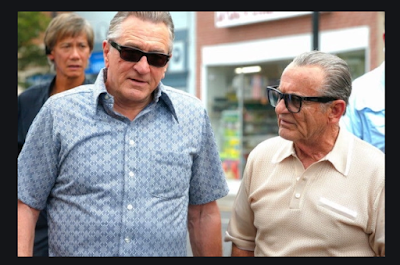 If this movie is a reflection of real-life it ignores the role of women who are relegated to being mere scenery and we witness no acknowledgment of population diversity in the cities. As with many of Scorcese's movies, the focus is on the Italian immigrant gangster subculture thereby giving THE IRISHMAN a feeling of predictability.
Posted by grace graupe-pillard at 6:09 PM 1 comment: Links to this post