Dear Netflix,
I am sorry I ever brought you into my life. My daily routine has been disrupted and I am not sleeping because of the long hours I spend being entertained. I can be very excitable, and have a tendency to become addicted listening and watching your tales which can take hours and sometimes weeks to come to some resolution. I am hooked because of great acting, writing, visual imagery, and the mystery, poetry, and diversity of ideas, that are brought into the manageable circle that was my universe.
But a warning: you cannot take over my life so be aware that we are going too fast and need to slow down to make this relationship a permanent one.
grace
Posted by grace graupe-pillard at 1:31 PM No comments: Links to this post 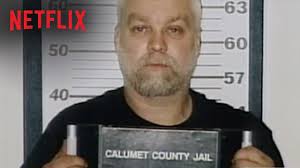 I am mesmerized by the Netflix series MAKING A MURDERER - the title is open to many interpretations - does it refer to the corrupt system that wrongfully imprisoned a man for 18 years - does that "make" a murderer; is it the pinpointing of an individual without investigating other potential suspects - "criminal tunnel vision" in revenge for a suit brought against local county officials "make" a murderer; or are Mr. Steven Avery and his nephew the murderers of a horrific crime committed 2 years after DNA exonerated Mr. Avery of the first offense?
Questions about class and "justice"; the fascination of watching a trial in progress - the process revealed - the time, expense, and terrible emotional costs to all the families involved are part of this intense viewing experience - a documentary that is still unravelling.
Truth can be slippery and fragile to grasp. MAKING A MURDERER is profoundly sad; a stunning portrait of the "powerless" pursued by those who have institutional power to alter the trajectory of their lives. Mis-steps are brutal and unforgiving.
Posted by grace graupe-pillard at 6:53 PM No comments: Links to this post 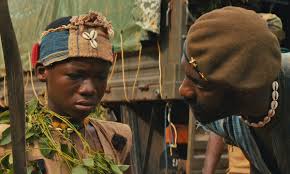 Director Cary Joji Fukunaga's "BEASTS OF NO NATION" is a terrific film - beautifully acted, directed and photographed. I am numb from the sadness of watching a movie about the recruitment of young boys to participate and be indoctrinated into the horrors of war, where fellow "soldiers" grown into your family. These children witness what can never be purged from their minds and hearts. To lose the innocence of childhood, to descry the cold-blooded murder of one's relatives, and the loss of the land of your ancestors - watching your country being torn apart by constantly changing political factions; survival becomes a momentary respite from killing or being killed; it all becomes easy and commonplace.

War turns a sensitive, imaginative and intelligent youngster into a "beast", but one who never loses his moral conscience, therefore suffering from the fact that he cannot dismiss his own conduct in a world that he was tragically thrust into.
Posted by grace graupe-pillard at 8:06 PM No comments: Links to this post 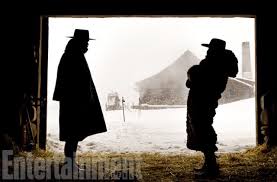 Quentin Tarantino’s films are wildly original, despite his cinematic homage to great directors. I know there will be an excess of violence, blood will hemorrhage, splatter and “spritz” over everything and everyone, while the characters keep on talking  literally to their dying breath. Dialogue which is both amusing and penetrating is the linchpin of his movies -  refreshing in its fearlessness in talking about issues of hate, misogyny, and racism that have oozed under society’s surface veneer of civility, over the centuries. Tarantino’s approach is not to preach but to show through his characters their appetite for revenge, greed and the conceit of self-interest.

THE HATEFUL EIGHT opens up with panoramic shots of horses galloping in rhythm pulling a stagecoach silhouetted against vast mounds of white snow; an infinite vista emptied of form with only a white light flooding the screen.  We are blinded by the beauty and the calm stillness of the landscape; short-lived - the drama begins. Words slice through the silence and language becomes a weapon; Tarantino’s unique verbiage becomes a tool that wounds and spills blood setting the stage for physical slaughter.

Bounty hunting for the most ruthless,  becomes the chosen profession of both former Union and Rebel fighters who are skilled in bringing “accused criminals” - those WANTED: DEAD OR ALIVE back to small frontier towns to be hung. Trials are an afterthought - the reward is in the successful transport of prisoners to the “hangman.” In this movie, there are at least 7 men and one woman who are itching to shoot each other down with very little pretext. All the lives of the “hateful eight” converge and ignite at Minnie’s Haberdashery - a cabin with a stable and outhouse set like a punctuation mark in the center of the pristine snow-covered terrain - a warm space serving food and drinks for drivers and passengers and a shelter for the exhausted horses.

Like a lot of Tarantino’s movies, his characters are mysterious - past lives and actions are questionable - truth weaves in and out of the picture; the agility of “the talk”, the facility of the tongue to deceive is always hovering in the fetid air. The first person we see emerging from the all-encompassing blanket of snow is Samuel L. Jackson halting a stagecoach speeding to keep ahead of the blizzard, and  confidently hitches a ride - frozen prisoners - all dead in tow. Jackson gives a terrific performance as Major Marquis Warren - a grizzled legend in the land, not only for bringing in his bounties “dead” rather than alive, but for being a pen pal and confidante of President Abraham Lincoln, a letter from Ole Abe reverently folded up in his breast pocket - the letter being a catalyst for discussion and a symbol of the former black Union soldier’s stature. THE HATEFUL EIGHT bristles with post Civil War disputes - the war might have ended a few years before but a peace treaty does not allay animosities that run deep from generation to generation to this very day.

We next meet  the wagon’s occupant, John “The Hangman” Ruth (Kurt Russell) handcuffed to a swollen, blackened eye Daisy Dormergue (great performance by one of my favorite actors - Jennifer Jason Leigh) being brought into Red Rock - for the $10,000 reward. We are never told what Daisy was charged with, but the racist venom spewing out of her mouth reveals a grotesque spirit which is palpably visible on her battered face. Tarantino’s over-the-top violence does not coddle women and it is difficult to watch Daisy being a punching bag and receiving the brunt of “the hangman’s”  brutality, but Tarantino literally does not pull any punches especially when he is dealing with a fanatical bigot.  Another passenger, who is frozen  by the extreme elements, is added to the group -  Walter Goggins plays Chris Mannix an ex-Confederate soldier and the newly appointed sheriff of the town where the hanging will take place.

Upon arriving at the rest stop, the action begins - 4 men are already there waiting out the blizzard - with a mesmerizing performance by Bruce Dern as Confederate General Sanford Smithers - an elderly man whose claim to fame is the slaughter of a black Union Calvary Division. To round out the “hateful eight” picture we have Tim Roth (always a favorite of mine) as the actual Hangman of Red Rock complete with a phony British accent, suave and ironic (reminding me of Christoph Waltz’s character in Django Unchained,) and Michael Madsen - a Tarantino ensemble regular as Joe Gage - a laconic stranger lurking in the background, quietly observing the scene. And then there is Bob (Demian Bichir ) dubbed “The Mexican” who seems to be running the joint - claiming that Minnie is out of town. For Major Marquis Warren who misses nothing - it all does not add up.

What ensues in this darkly lit claustrophobic space with occasional bursts of light from the door opening and closing by the storm’s wind  is mayhem. Tarantino’s ability to use language is irresistibly seductive and I was never bored. Shards from words piercing the atmosphere infuse the room with a straining tension. Rapier wit together with brutish violence dominate the expansive monologues. THE HATEFUL EIGHT is interesting in that of all Tarantino’s movies - this one is intentionally the most constrained by the oppressive limited space; ultimately there is only the outside and the inside.
Posted by grace graupe-pillard at 6:39 AM No comments: Links to this post