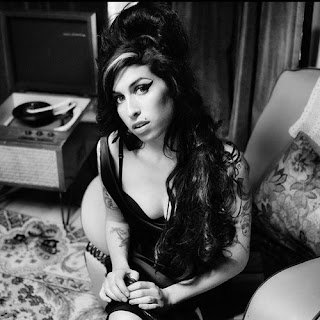 I saw AMY and THE DIARY OF A TEENAGE GIRL two evenings in a row; both involve young teenage girls 16 and 15 respectively, raised by single mothers in the 1970’s; their fathers were gone before they were 10 years old; “abandonment” issues with all its profound psychological baggage forced them to crawl out from under the darkness of loss, employing whatever outrageous means necessary to survive and barricade their emptiness with the sweetness of “love.”  Amy Winehouse and Minnie ( a sensuous Bel Powley) kept diaries as teenagers are wont to do - drawing floating hearts up and down the brisk white paper interspersed with a teenager’s awkward handwriting jotting down lonely adolescent  yearnings for desire and attention.

AMY directed by  Asif Kapadia is a biopic - using previously unseen movie footage, stills and media clips after she became the frenzied paparazzi’s favorite “shooting star.” AMY portrays many aspects of Amy Winehouse’s short life - beginning with grainy black and white home movies of a wild- haired girl partying with close, lifelong friends - mugging  it up for the camera - tongue whipping out of her gap-toothed full mouth, eyes wide with the reckless innocence of youth. We first hear her amazing voice singing Happy Birthday belted out like a scream rising above all the other carolers, trailing off after every other partygoer had expelled their last breath - evidence of her control and bravado. The power of her sound is already palpable. 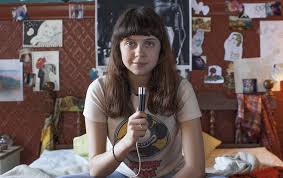 THE DIARY OF A TEENAGE GIRL directed by Marielle Heller who also wrote the screenplay adaption based on a graphic novel by Phoebe Gloeckner focuses on Minnie Goetz, a wide-eyed, large lipped, neatly clipped and deceptively passionate brunette wearing oversized T shirts and pants, desperately wanting to be touched - finding solace in sex. We first meet her  in a state of exuberance at having f-cked Monroe, (a terrific performance by Alexander Skarsgard,) a lanky 35 year old man who hangs out all day on the couch - the boyfriend of Minnie’s mother Charlotte (Kristen Wiig,) who is supporting the family by working at the library coming home to an apartment electrifyingly alive with friends drinking, smoking weed, amped by cocaine and booze. It is in this chaotic environment that Minnie and her younger sister are figuring out how to function basically on their own - attracted and repelled by the precarious foundations of their surroundings.

Amy Winehouse expresses the oscillations of unfettered freedom and the agony of indifference and despair through musical intonations and verse; Minnie on the other hand, draws her fantasies limning strong lascivious sketches reminiscent  of her idol - the wonderful Aline Kominsky-Crumb  of Twisted Sisters comics fame, whose oversized female alter ego struts alongside Minnie deep in conversation - an admired and imaginary playmate who is a source of comfort and companionship.

The movie AMY, through previously “unseen footage and unheard tracks” describes the trajectory of a willful child maturing into an individual who is  extreme not only in appearance - beehive hairdo sitting atop eyes that are outlined with mascara wings, facial piercings and tattoos adorning a thin, fragile body, but a person whose determination to write compositions that are authentic to personal experience;  singing with attitude, bold beyond her years, relentlessly educating herself by listening to black female, jazz vocalists - those “greats” were her mentors. Strumming on the guitar Amy mesmerized the power-brokers of the Music Industry who helped catapult her into a world of glamour, fame and fortune.

Amy Winehouse’s voice is like none that I had ever heard before employing calculated phrasing, and a staccato range which is akin to a brutal caress. Why is it that the biopics of amazing artists follow the trajectory of a cliche? Daddy's Girl is tattooed on her arm having spent her short life worshipping a Daddy who left and returned when she was on the fast lane to success; his own financial interests taking precedent over his daughter’s well-being. Amy like the fictional Minnie has  love relationships based on need and destructive devotion. The love of Amy’s life, Blake Fielder, with whom she was inseparable, breaks her heart, and then he too returns, linking romantic turmoil with an already reckless life-style, which escalates once they wed. Blake introduces her into a world of drugs and  the magic of oblivion, bringing both euphoric rapture and endless despair to a delicate physique which coupled with alcoholism and  Bulimia, has to fight to endure - sadly a losing battle.

Both films show the development of precocious teens; THE DIARY OF A TEENAGE GIRL is limited to an invented character who ultimately  achieves an awareness of the difference between urgent indiscriminate sexual couplings, and an awakening to the fact that she has more control over her body and her fate than she realized. On the other hand the Amy Winehouse’s “star is born” bio is a heartbreaking ode to a performer whose career had just begun; though she had completed only two albums in her lifetime, she won accolades and awards from her peers, and was idolized internationally. Grievously the world watched a comet dissipate into the ether.
R.I. P.
September 14, 1983 -July 23, 2011

Posted by grace graupe-pillard at 7:23 AM