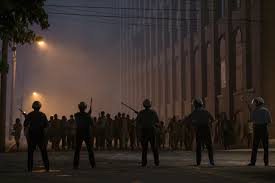 My tears have dried up but my throat is still choking from the injustice that the characters experienced in the incredibly tragic film DETROIT, directed by the great Kathryn Bigelow. Sticking close to the facts that occurred in 1967, this movie is a docu-drama about the events leading up to, and the aftermath of the Detroit riots, when a city was trashed, looted and set afire - a red-hot blaze that spontaneously erupted spewing forth all the hatred and resentment that racism had wrought.


DETROIT is expansive and intimate, coldly brutal and deeply felt, where stereotypes are upended and a portrait of the white/black divide is bleakly demonstrated. Bigelow focuses on a particularly merciless incident that occurred at the Algiers Motel - sited in the midst of the fuel-filled horror, seemingly far removed from the screeching of sirens and the acrid smoke of burning buildings, but historically primed to become a symbol of vast psychological and physical brutality, echoing the conflagration outside.

Detroit police officers searching the Motel for a sniper, led by a sadistic bigoted white cop, terrorize and murder 3 black teenagers in cold blood. How that episode of blatant criminality impacts the surviving participants is heart-wrenching for its razor sharp depiction of our American Judicial system, and the stench of racism which has penetrated into and perverted every aspect of both black and white lives. Fifty years later - not much has changed.
Posted by grace graupe-pillard at 7:59 PM